I was considering buying an iPad, but I have to say that I was very sceptical about what it can do and whether I would have any use for it. After some deep pondering and a bit of gambling however, I decided to get one anyway.

The 32Gb 3G model seemed to be the best option, with plenty of space for anything from video podcasts to iPad applications. For protection, I also bought the Apple iPad sleeve which also doubles as a stand.

Since I am running iOS 4 on my iPhone, there was no way of restoring my apps and other information to the iPad. This means that I had to start from scratch, which is necessarily not a bad thing, and meant I was off to a fresh start.

After syncing with iTunes, I fired up Safari and was delighted to see my bookmark toolbar appear exactly as it does on the Mac! I will not bore you with writing about the pure awesomeness of browsing the web with the iPad, there are lots of other places for that. Instead, I let me share the first problem I found; there is no Swedish keyboard! Granted, it has not been released in Sweden, but it is still just a software keyboard. I was also wondering who at Apple thought it was a good idea releasing the iPad without iOS 4 and multitasking.

I was delighted to see lots of beautiful and truly usable apps already available for the iPad, such as Reeder, which is an excellent RSS reader which synchronizes to Google Reader. I get all my RSS fixes using this app since I bought it -- it just provides an excellent reading experience.

Another remarkable and excellent application is Air Video, which simply lets you stream on-the-fly transcoded videos directly to your iPad (and iPhone). This might not sound like anything special, but the experience is perfect, and everything just works right out of the box. You can stream anything including high-definition Matroska files, and the video quality is flawless.

This was a first of a numer of posts regarding the iPad and my experiences with it. As I use it for just about anything right now, there are lots of apps and experiences to stumble upon and share. And just remember to get a good microfiber cloth for cleaning the screen from time to time.

Oh, this post was entirely written on the iPad using the WordPress app. 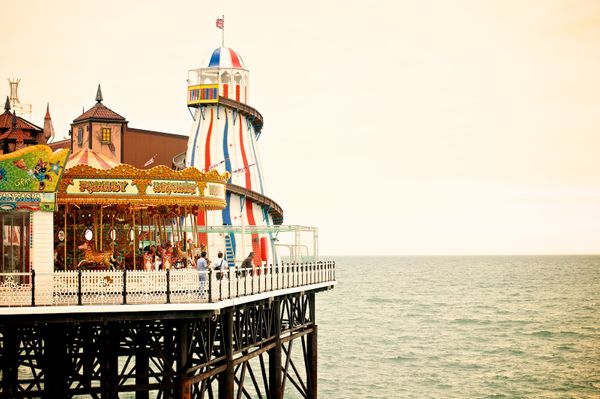 Brighton somehow conveys the feeling of vintage, so the post-processing of these photos are made to reflect the feeling of walking around the beaches and piers.

I have been a long-time Gmail user and prefer using their web interface for my personal email, which I love for a number of reasons. For instance, when receiving a new reply to an archived email, the entire conversation is always shown, regardless of